I figure that if I am to truly revive my blog I should start by writing at least a post for every time I go fishing.  On top of that there should even be times where I make a post even if I just think of a cool thought about fishing.  That being said one of my goals has always been to make a fly fishing blog that people actually enjoy reading.  I put a lot of pressure on myself to churn out blockbuster posts on the reg.  I want my fans to be excited when they see that I have published a new post.  I don't want to produce no "Chicken Soup for the Soul" when I can make "Magnesium Citrate for the Fly Fishing Soul" instead.

Someday I would like to break my personal record of blog views from July of 2016.  This year I will take my blog to new heights.  Who wants to come along for the ride?

It's always been easier to write posts when I have a day filled with the spoils of battle.  I don't have to dig as deep for jokes if I can just cobble together a few photos of trophy fish, a couple nice scenery shots, a selfie or two and some sarcasm.  Who wouldn't want to enjoy a post like that?

As I snapped a photo of my dad throwing on his fly fishing vest I thought to myself, "Wouldn't it be cool to have a blog post titled, "The Village Bicycle" being that pretty much everyone has fished this spot a time or two.

I looked at the Goldilocks bugger that has been tied on the end of my line since the last time I fished this rod two weeks ago and thought,"I should make a post titled Goldilocks and the Three Trout.  Now all I have to do is catch three trout.".  That dream died when I lost my Goldilocks Bugger to a snag on my first cast of the day. 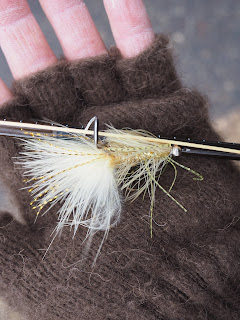 I think this was a Raccoon at some point but it was hard to tell.  I wondered if he drowned while being swept away in the flood or if the high waters had picked him off the forest floor and deposited him in this tree. 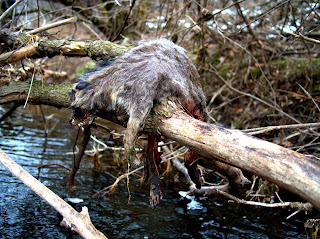 The cold January air did little to dampen the odoriferous emanation.   Oo oo that smell.

I suppose I could write a post titled Nature's Way. 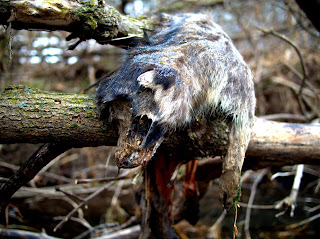 Dad walked back to the van after we swung and missed at another spot. 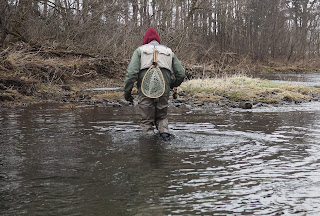 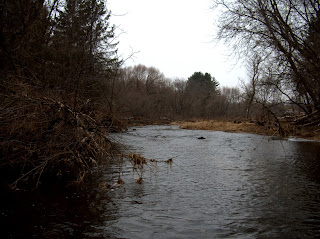 I ended the day with zero fish to hand but I still had fun.
Posted by Eddie Rivard at 5:00 PM