Trapfest 2016-A Weekend To Remember

Every Fall, some of the finest and most charismatic trout fishermen in the Driftless Area gather at the Westby Rod and Gun Club campground on the banks of the Timber Coulee in southwest Wisconsin.  They are summoned there by a man known as Trapper and the event is known as TRAPFEST. 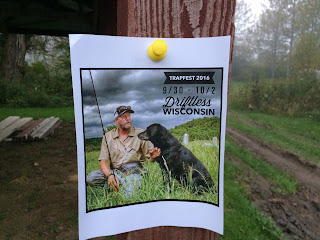 This would not be my first appearance at Trapfest and hopefully not my last.  It came to pass that I needed to visit this area just as much as this area would benefit from my presence. 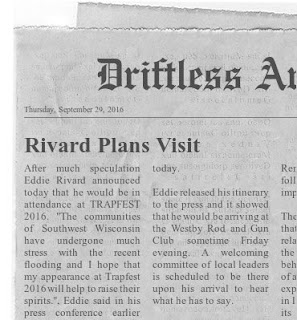 I left the Twin Cities sometime between 3:00 and 4:00pm on Friday.  I decided to get a little fishing in along the way and I made it my chosen stream at about 6:00pm.  I only had about an hour of daylight left at that point but I know from experience that the final hour of daylight is "Prime Time" when it comes to trout fishing.
The stream was running clear and I noticed that the vegetation on the banks was still flattened down still from the flooding that had occurred the week before.  This made for easy walking and I noticed many trout in the river.  I caught what was probably a seven inch Brown Trout on one of my first casts.  It was a good sign.
Continuing upstream and casting my bugger in any spot that looked fishy I had a few bites and then I had a bigger fish on.  It jumped out of the water and I could see it was somewhere in the 15 inch range and then it got away somehow.  I knew when I lost it that I probably didn't do a very good job on the hook set and reminded myself to pay better attention in the future.  Fly fishing for trout is some odd mix of being footloose and fancy free while at the same time being insanely focused on the task at hand.  Become too focused and it ceases to be fun while being too apathetic results in lost fish which also decreases the joy quotient. 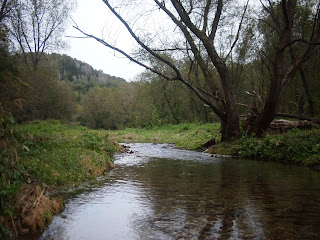 After loosing the decent fish I walked up to the next pool which was deeper than the last but I could still see the bottom.  A school of small trout could be seen swimming around and then I noticed something cool.  It was what looked to be a 20 inch trout swimming around with an 8 inch trout in it's mouth.  I just stood there and watched it while over the course of the next few minutes the 8 incher disappeared down the throat of the mega trout.  It looked something like this. 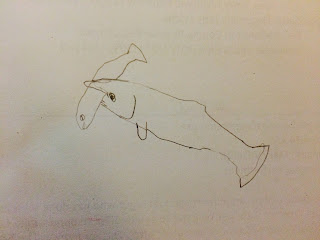 I made to the campground that night and it was nice to see Trapper and the others in attendance.  Nick and I made plans to fish Saturday morning.
While we were finishing breakfast in Westby Nick informed me of our itinerary for the day.  We would be visiting a stream that was known to have the potential of harboring trophy brook trout.  Nick had done much internet reconnaissance on this creek and I trusted what he had to say about it.  One of my trout fishing goals this year has been to land a Driftless Area Brook Trout over 16 inches in length.  This would be a good place to try an achieve that goal.
When we made it to the stretch Nick had chosen we started taking turns fishing the choice water.  In order for two guys to fish a small stream together effectively each one has to be fully vested in the other achieving success.  Joy is achieved through a delicate balance of give and take.  Nick is and excellent fishing buddy and we always have a good time.
Rounding a bend between pools I noticed a cut bank so i dropped my bugger down and gave it a wiggle.  Fish on.  It was a nicely colored male Brook Trout. 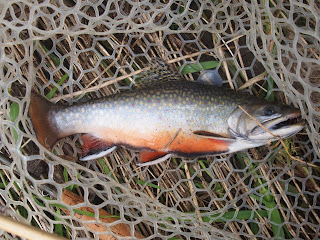 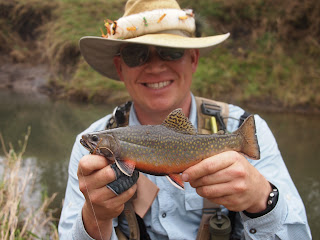 Nick was catching fish as well.  I think this one measured in at 13 inches.  Poor Nick's huge hands make even decent sized fish look small. 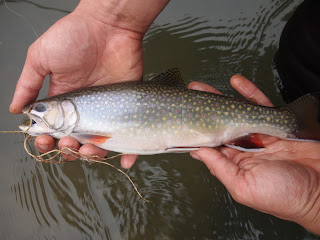 We continued upstream when we got to what look like a nice deep corner bend pool.  Nick instructed me to fish it because he needed to stop and put a different lure on.  I launched my bugger to the top of the pool where the current came in and let it sink for a few seconds before I started to strip it in.  Nothing happened on the first four strips but on the fifth strip something happened and it was a fish on the end of my line.  I could feel the hook plunge into the upper jaw of the trout on my strip set.  This time I was paying attention.  This time I would land the fish.  The trout had a different idea as he whizzed passed both Nick and I downstream into the next run.  I unhinged my net from it's holster like a pro and ran down after it shouting, "Biggest Brookie Ever!"  Nick had yelled out that he could help me net it but by that time I was hot on it's trail.  One step, two step, three step, scoop!  The Brookie was mine all mine. 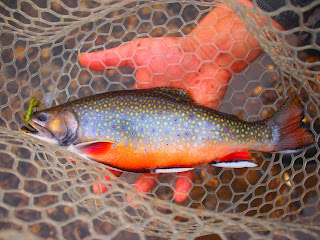 Which happens to be my personal best. 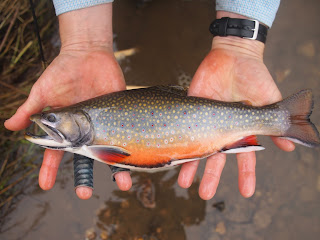 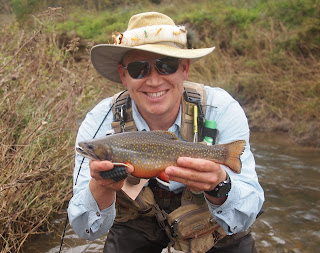 Right before the release. 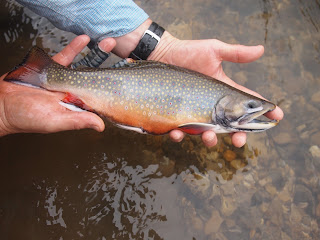 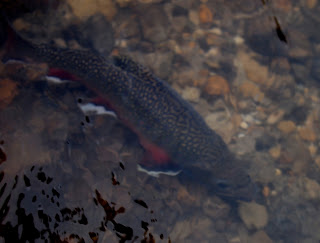 A few minutes later Nick exclaimed, "You know you are in Wisconsin when you see tires in the stream.". 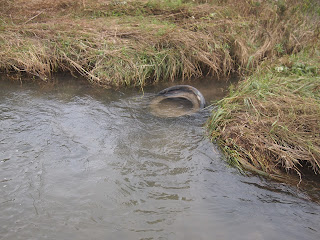 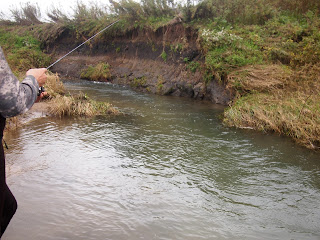 Nick putting a different lure on. 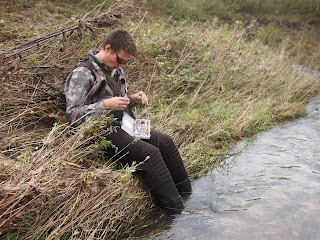 Nick's box of death and destruction. 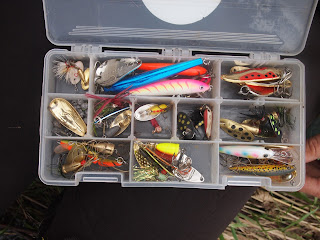 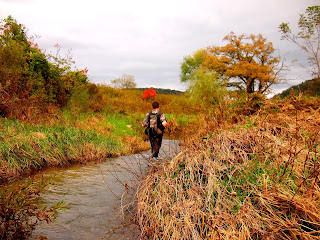 Nick with another nice trout. 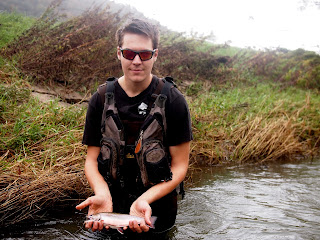 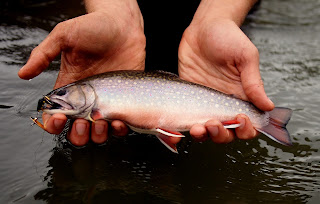 It ended up being a really good day.  We traveled back to Westby Rod and Gun to camp for the night and to see how the other Trapfesters did.  Another night of lively conversation ensued.

The next morning I had breakfast with Nick and Bob at Borgen's in Westby.  It was a great breakfast that involved much talk about trout fishing.  After breakfast we all went our separate ways.

I went back to the campground where I talked with the guys that were awake and tied a few Eddie Buggers since I was running low and needed some for wherever I was going to be fishing on the way home.  It was tough deciding where I should fish but I finally made up my mind to explore a new place that I had heard good things about in the past.

I spent about an hour driving around before I found the stretch of this creek that contained trout.  It only took one cast to figure that out and I quickly caught four Brook Trout in the first little pool that I fished. 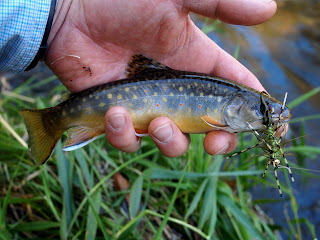 What a productive little spot to swing the bugger. 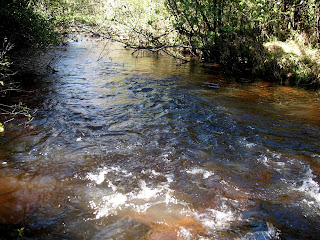 I figured if there was trout at this spot there would probably be trout a mile downstream so I walked down the road for a mile and darted back through a section of woods to make it to the creek.  I spent the next few hours catching Brook Trout after Brook Trout. 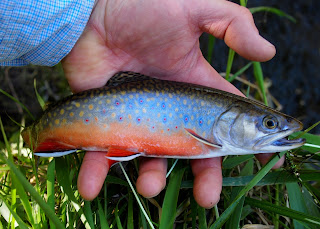 The water had a slight stain but I could tell where the deep spots were because I couldn't see the bottom, 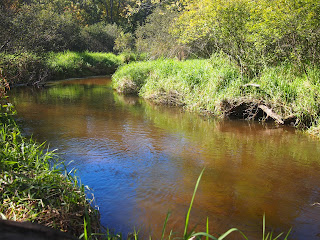 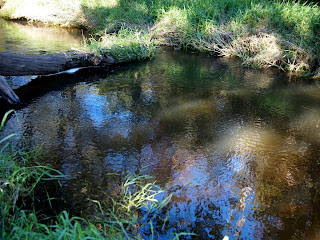 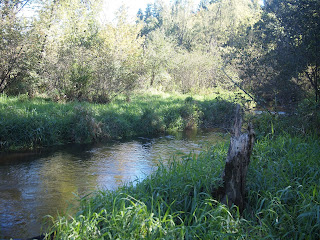 One of the nicer ones. 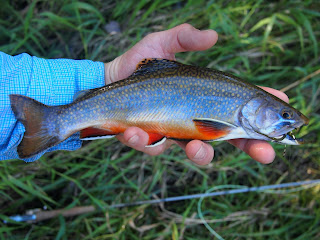 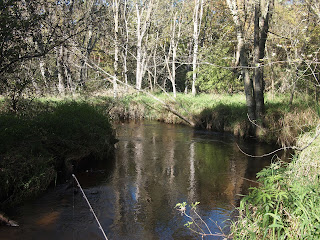 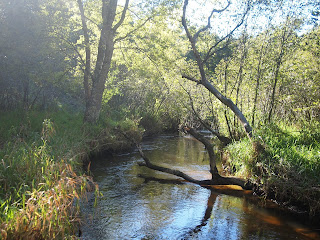 I never counted but once I was done I estimated that I probably landed between 30-40 Brook Trout with the biggest being around 11 inches.  I'm looking forward to exploring this place more next summer.

What a great weekend!
Posted by Eddie Rivard at 8:30 PM 11 comments: