About a month ago I was driving aimlessly around southern Minnesota.  I drove over a creek and then I remembered that I had my fishing stuff with me.  "Have rod, will fish", I thought to myself so I pulled over and mounted up.

It was a clear bright day, round' about one
Eddie R was on the stream, trying to have a little fun
Searching for some trout, so I could get a smile
Walking in my waders, mile after mile 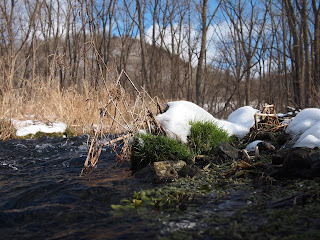 The water was clear and the trout were skittish.  If these trout had a language it would have to be Yiddish. 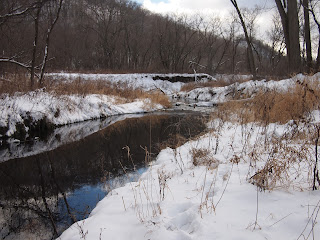 I soon realized that the size 1 Frick's Fix streamer that I was casting was probably a little too big for this stream on this day.  I had recently acquired some Green Turd woolly buggers from my friend Dan Braun.  It was as good a time as any to see if the Green Turd was as effective as Trapper told me it was. 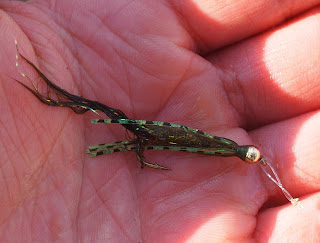 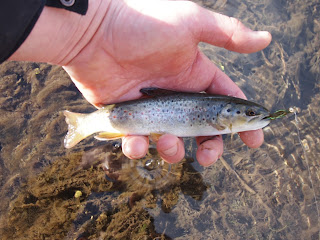 After setting the Brown Trout free I looked over and saw something odd half buried in the snow. 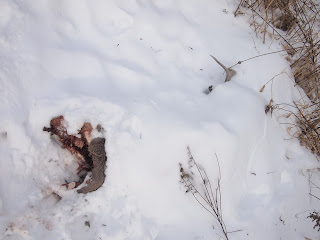 I was a White Tailed buck.  As I grabbed his antlers I was overcome with a vision of a life cut short. 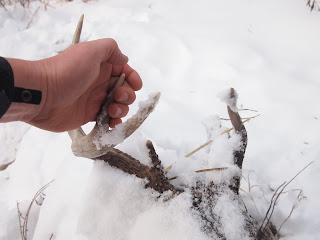 A ribbon of green reminded me of spring.  The Ojibwe word for spring is Ziigwan.  "How do I know that?", you ask.  To answer your question I Googled it. 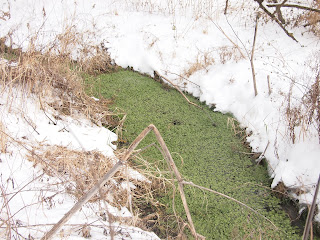 This bend pool was chock full of trout.  I spend twenty minutes making a big circle around it so I could cast into it from downstream in an attempt not to spook the trout.  My efforts resulted in failure but it was good practice.  Many people think that I am a good trout fisherman because I am good at casting and choosing the right streamer.  Those people are correct but if you spook weary trout before you can present them with your fly then all your efforts are for not. 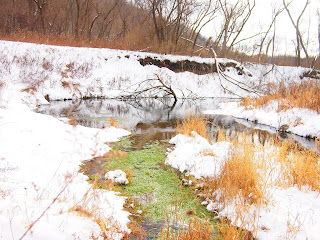 The river was calm and so was I.  Winter in the forest is a peaceful time of year. 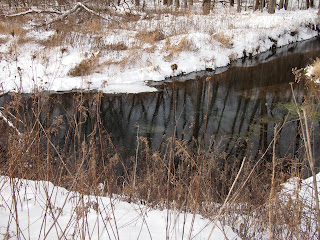 Soon I came upon a spot in the stream where it was a little bit deeper and there was a half submerged log.  The log provided cover for a pod of about 30 trout.  They scattered as I approached.  "Game over", I thought to myself.  I stood there and watched as school of trout huddled together closely under the log.  One of the Trout bore the markings of a Brook Trout.  "The game has just begun", I thought to myself.  One thing I know from my years of fishing is that Brook Trout are not the most intelligent of prey.  They can often be coaxed into biting as soon as 37 seconds after being spooked.  I wanted to be sure the Brook Trout was ready to bite so I waited 45 seconds before I dipped the Green Turd in the water and jiggled it in front of the school.  Sure as shit that Brookie broke formation and mangled the Green Turd.  The battle was short and soon he was in my grasp.  What a beauty. 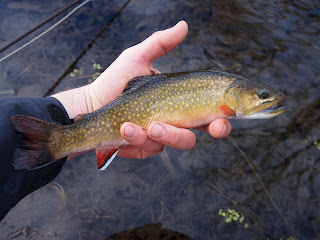 I usually think that the whole video of releasing a trout is hokey and overplayed unless it is one of my videos.  Here is a short I made of the release.

After releasing the Brook Trout I was pretty much ready to call it a day I started walking back to my car.  Then I noticed another Buck half buried in the snow. 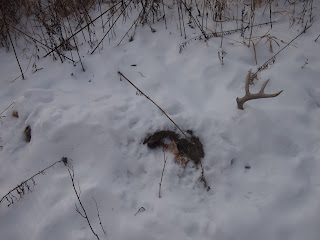 This was a ten point buck.  As I grabbed his antlers I had yet another vision. "My side hurt and I was running from the orange men.  Incredible thirst overcame me as I ran towards the stream".  Snapping back to reality, "What a waste", I thought to myself. 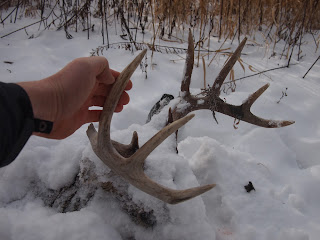 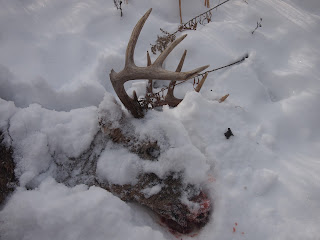 It wouldn't be long before the forest rats took their share. 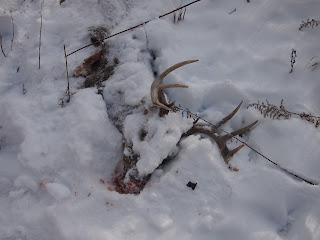 Sometimes I forget what I look like so I take photos of myself. 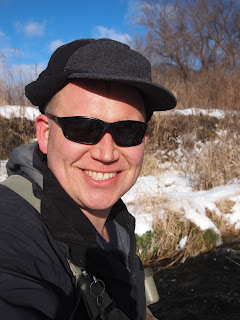 Over the course of the next few days all I could think about were those two bucks wasting away in the forest.  I contacted the land owner and was granted permission to retrieve the deer heads.  Then my people arranged for DNR officials to to meet me at the site to obtain the proper possession permits.

I traveled back to Non Hidden Valley Creek and met with the agents from the Minnesota DNR.  Getting out of my car I was greeted with smiling faces.  I was happy to hear that both of these DNR agents were big fans of my blog.  They couldn't believe that they finally got to meet me in person.  After a short photo and autograph session I led them through the fields and forests to the location of the the dead deer. 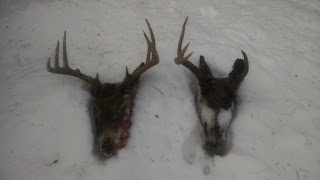 This is was a MN DNR SEIZURE RECIEPT looks like. 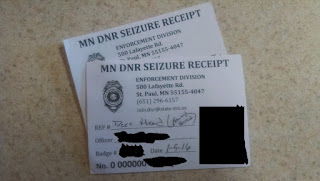 After retrieving the heads I had about an hour to kill and again remembered that I had my fishing stuff with me.  Mount up!

The light was dimming, late afternoon
Eddie R was on the stream, life is but a dream
My memory of this is blurry
I was in a hurry 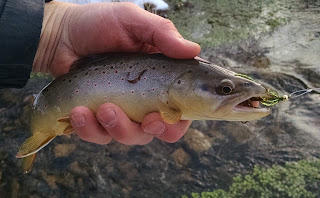 I proceeded quietly upstream and was soon rewarded with another healthy Brown Trout. 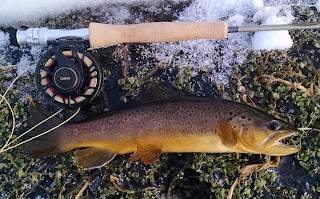 Can you guess what he bit on? 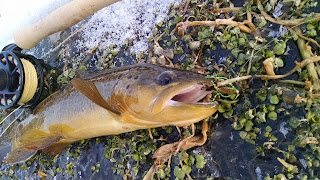 Confucius say, "It is easier to post three photos of one trout than it is to post one photo each of three different trout.". 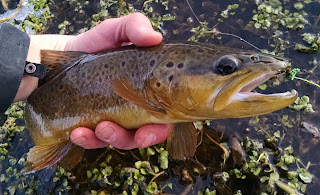 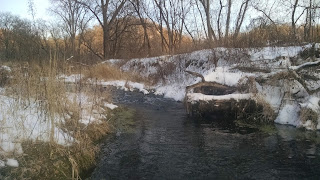 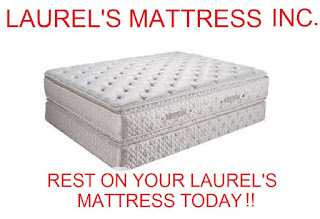 After many hours of scraping and boiling I finished the first skull.  If I never have to smell boiling brains again I will die a happy man.  The other skull is currently buried in a pile of snow.  I will let the maggots take care of that one in the spring. 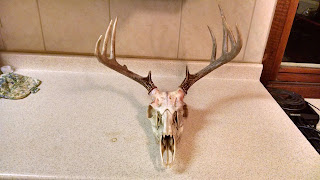 PS-The part about the DNR agents being big fans of my blog was completely fabricated.  I just thought it would add a little humor to the post.