So my last job of the day ended up being in a trouty little town just a little ways east of the Twin Cities.  I was glad that I had the planned ahead and brought my fishing stuff with me.  It was already around 7:30pm but before I could get any fishing in I was going to have to eat something.  Whenever I buy a Five Buck Lunch from Dairy Queen I almost feel guilty.  I can't believe they are making that much money giving me so much food for only five dollars.

As I strung up my rod and put my outfit on I thought about the limited time I had to fish.  They say Eddie Rivard can catch more trout in an hour than most guys can in an entire weekend.  One thing I've noticed is that the less I care about catching fish the more fish I actually end up catching.  It's all about doing things the right way.  I call it the Rivard Way but you can call it whatever you want as long as you keep the words Rivard and Way.

So I've always referred to the last hour of daylight as "The Witching Hour" but upon looking up the actual definition of "Witching Hour" I guess I was a little off.

When I made it down to the creek it looked like it was prime time.  I was pretty confident that I would catch a few. 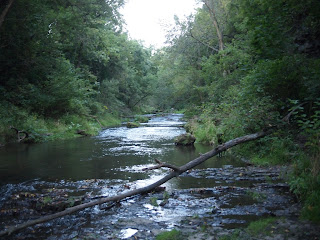 Not only was I confident I was also very happy.  After taking 37 selfies I finally took one that was blog worthy. 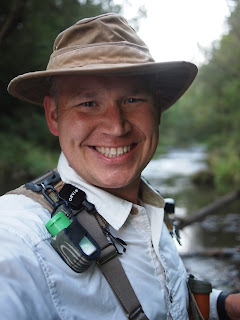 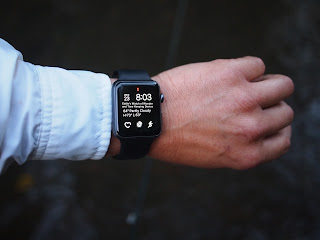 I cast a Hippy Stomper for a while and had a few weak hits from micro trout before using the last ounce of daylight to tie on a small streamer which I had many bites on and a few brief hookups but failed to land any trout.  I was still pretty sure it was going to happen.  I believe the waving of my rod somehow conjured up a group of bats that were flying in circles around me in the darkness.  I felt like a great wizard.  Perhaps there really is something about this Witching Hour.  It was all going quite well until one of my bats somehow got tangled up in my line.   It wasn't even hooked.  To make matters worse I could hardly see and I hadn't brought a headlamp because I didn't plan on fishing late into the night.  The bat kept trying to swim towards me.  I assumed it thought I was a tree and it probably thought it could escape the water by climbing up on me.  I was not down with this idea.  It was pretty horrible but eventually I was able to get the bat untangled and  I could hear it walking around on the bank.  My line was pretty tangled and the only way I could get it untangled at this point was to cut my streamer off.  Afterwards it was too dark for me to tie anything else on to the end of my line so I decided to call it a night. 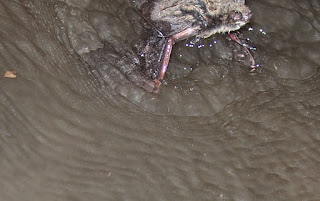 While I was driving home I figured that I probably could have used the light from the LCD display on my camera to tie on a new fly but by then it was too late.  Oh well it was still a fun little adventure. 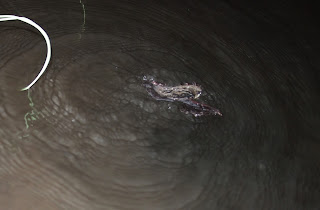 A few years back I was on a date with a woman and after I got done telling her all about myself I finally gave her a chance to speak.  After a while she told me about an ex boyfriend of her's who she described a somewhat of a paranoid type.  She told me about how he insisted that she put together a "Bug Out Bag", so that when the stuff hits the fan they could head for the hills as quick as possible.  I think that was the first time I was introduced to the concept of a "Bug Out Bag" and the whole idea of it has stuck with me for some reason.

Fast forward to this weekend I was a little bummed Friday when I realized that some previous commitments were going to pretty much make it a weekend without trout fishing.  To console myself I made it a point to get out on the Mississippi for a few hours Friday night.  While I don't usually make it a point to name the waters that I fish I am just going to give my readers a little tip here.  The Mississippi River has fish.  Don't ever complain that old Eddie didn't contribute to your vast array of fishing knowledge.  Here is a shot of one of the many Freshwater Drum I caught Friday evening.  Besides that I also caught a couple small Smallmouth Bass. 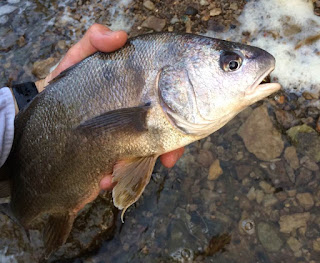 So after my volunteer commitment ended on Saturday afternoon I received a call from one of the Nationwide Locksmith Contractors that I occasionally do work for.  They had an emergency lockout that needed to be done down in Red Wing.  One of the things I have always loved about being a locksmith is never really knowing where I will be working or what I will be doing on any given day.  I worked as far away from the Twin Cities as Rochester and Duluth as well as in many hodunk towns in between.  As soon as I knew I was going to Red Wing the little wheels in my brain started churning.

According to my calculations I  had just enough time to go to Red Wing, complete the job, fish for ninety minutes and still be back in the cities early enough to make it to church on time.

This is kind of where the whole concept of having a Fly Fishing Bug Out Bag starts to make sense.  It only took about five more minutes for me to have my bag of fly fishing stuff with me when I left for Red Wing.  It's all about being ready at all times because you never really know when an opportunity to fish is going to present itself.

So after completing my job I had to figure out where I was going to fish.  I was pretty close to the Pottery Pond so I did a quick drive by and couldn't really believe how many people were there fishing what looked to be somewhat of a weedy cesspool.  I had another place in mind so I started heading that way and ended up going over Hay Creek as I made my way out of town.  I have a little habit of stopping at every trout stream I drive over and taking a look at the water.  I like to check to see if it looks trouty or not.  As I stared down at Hay Creek I noticed how the water in the river seemed to disappear underneath a bank before shooting out into the main channel again.  This is called and undercut bank and places like this are often home to the kind of trout that guys like me dream about.  I decided that If I fished here I could get in a few more minutes of fishing since I would be doing less driving.

Back on the subject of river currents and undercut banks for a second.  I've been lucky enough to fish with some of the "best of the best" fisherman around and one thing I've noticed that they all have in common is that they pay just as much if not more attention to how rivers work when fishing as how fish behave in certain situations.  Since I am always trying to up my own game I now spend a lot more time studying things like hydrodynamics and stuff.  This is high level competitive stuff.

I walked down the road a ways before finding a nice little path that led down to the creek.  This is a view looking downstream. 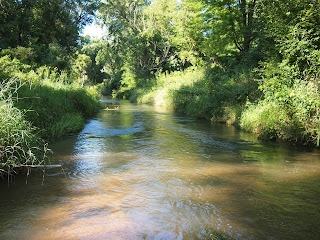 This is a view looking upstream.  Micro currents going everywhere.  I studied the river like Tom Brady sizes up the defense of opposing teams before making a play.  I am pretty much the Tom Brady of fly fishing. 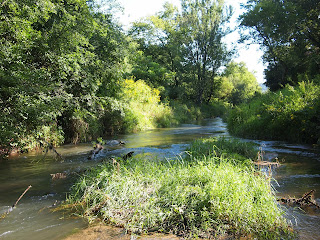 Armed with my Winston GVX Select Three weight I started making casts with a hopper/dropper style rig.  Over the course of the next hour I caught two Brook Trout and four Brown Trout.  I was one of those evenings where even though the trout weren't flying out of the water but I was having just enough action to keep things interesting.  This ten inch Brown felt like a giant against my Winston and the 5X tippet I was using. 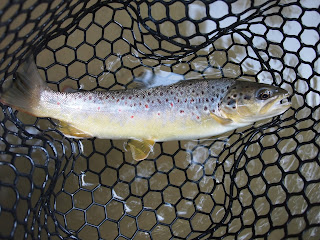 The ten incher came out of this run. 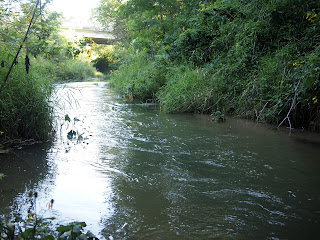 Here's that undercut I was talking about in the beginning of this story. Half the water in the river is actually underneath the bank on the right.  That's where trophy trout like to live. 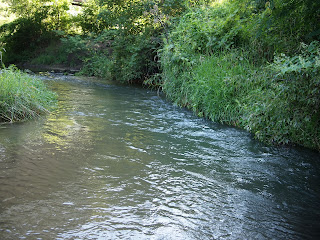 Looking downstream I reflected for a moment and was glad I gave this section of river a chance.  I have never really been much of a Hay Creeker but perhaps it deserves a little bit more of my attention. 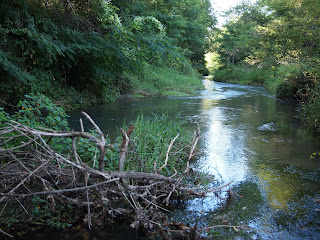 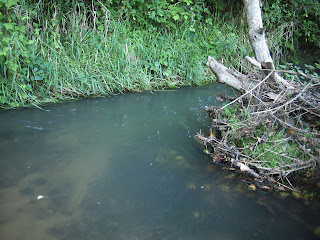 I always like to take a moment to check out the graffiti that is found under many bridges.  Some of it is pretty good. 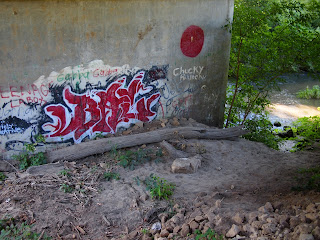 Posted by Eddie Rivard at 4:00 PM No comments: