One day every year I put away my fly rods and take out my gun.  That day is the Minnesota Firearm Deer Hunting Opener.  This year it was Saturday November 7th.  All fall I had been looking forward to that day.  I even went as far as making up a rhyme to be sure I wouldn't forget the date.  "Remember remember the 7th of November" I would say to myself throughout the day.

I woke up around 5:30am in the basement of my parents house in Taylors Falls MN.  I don't think I had fallen asleep until around midnight and am used to getting around 8 hours of sleep.  I felt like going back to sleep but then I remembered my pledge from the night before.  Nick Babcock had made a Facebook post saying, "Good luck to all my family and friends going deer hunting starting tomorrow. Be safe, and I am looking forward to all the big buck pictures!".  I replied saying, "I will try not to disappoint.".    I always try to be a man of my word so I decided that I must slay a buck.

Shooting time starts a half hour before sunrise and on Saturday that was 6:28am.  For most of my life I have always stumbled out into the the dark forest well before shooting time.  I noticed that many times I would spook deer out of their resting places before I could even shoot them and then I would freeze in my blind for thirty minutes or so before I could make a legal kill.  I knew that there was something wrong with this system so for the last two seasons I have done things differently.  I now do things the Eddie Rivard Way.

The Eddie Rivard Way is a system of rules I have developed using common sense.  The first rule is, "Never enter the forest until shooting time has commenced".  This way if you see a deer that you want to harvest you can legally shoot it before it runs away.  At this point there are no additional rules.

Around 6:30am I entered my dads workshop and picked up the gun and bullets he had laid out for me.  It was a 270 caliber rifle and although it wasn't the same gun I used last year I figured it would do the trick.  Once I was outside I loaded and did a couple practice aims.

The trick to shooting a deer with a scoped rifle is to line up the X with the spot on the deer that you want the bullet to enter.  I practiced holding the rifle and making the X part stay still for a long enough time where I could pull the trigger.  After about 15 seconds of that I felt that I was ready.

There is a style of hunting known as Indian Style and it is my favorite way to hunt deer.  Indian Style involves sneaking through the forest taking a quiet step or two and then standing still for a while becoming one with the forest.

The location of my blind is far back into my parent's woods.  I began my walk hunting Indian Style through the forest.  I heard many sounds.  Most of the sounds I heard were squirrels but some I could not be sure of.  I thought that some of the sounds could be Waawaashkeshi which is the Ojibwe word for White Tailed Deer.  If you are hunting Indian Style it helps if you speak the language.  I have spent years of my life studying Native American language and culture.

After about 15 minutes I had just made it over a hill when I sensed something.  I turned around and saw a deer moving through the forest.  I saw antlers on his head.  He looked at me and then looked forward and took a step. I raised my gun and could see that my shot was obstructed so I shifted my stance to the right about a half step.  I then took a second to line up the X thing on the scope.  I pulled the trigger and the bullet flew through the air towards the deer.  I heard a bang and the deer had disappeared over the ridge line.  I chambered another bullet and began my pursuit.  I wasn't sure If my bullet had hit its mark.  When I got to the spot where the deer had been standing I saw all this red liquid staining the foliage.  I knew it could be one of two things.  I decided it was real blood because why would anybody put fake blood in the forest?  I followed the trail of real blood and at the end of the trail there was a big buck.  Ayaabe I muttered in Ojibwe.  That means buck for those who haven't spent years of their lives studying native language and cultures.

After thanking Ayaabe for his life I took a photo of him with my cell phone and posted it to Facebook.  It would be selfish to keep a moment like this all to myself.  Over the course of the next few days 67 people would "Like" my photo.  I must be famous. 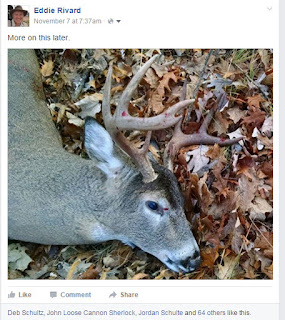 Then I looked at my phone and noticed that I had a text from Pa. 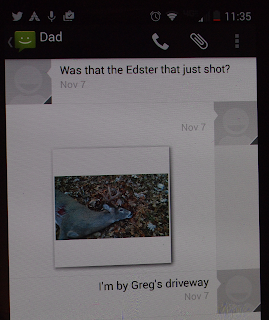 He had heard the shot and wondered if it was from my gun.  I sent him a photo of my buck and the coordinates of my position.  It wasn't long before he reached the rendezvous point.  I was glad I didn't have to try for a selfy. 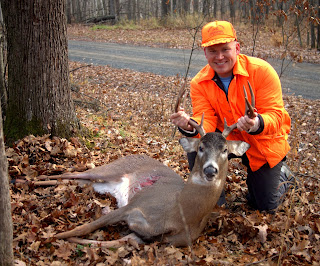 We got a couple nice shots. 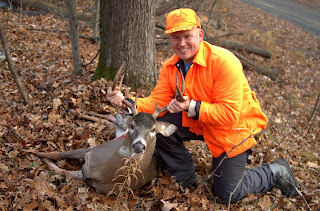 I could see that my bullet had hit it's mark.  I'm glad I spent all that time practicing holding the X still. 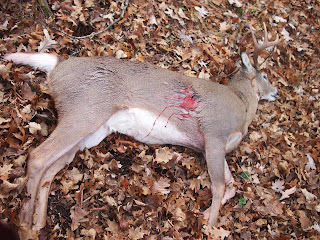 It was nice that he was so close to Greg's driveway.  We just loaded him up in the trailer. 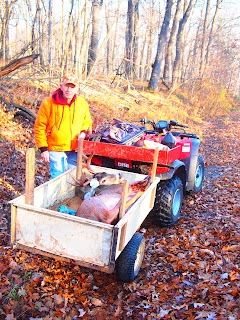 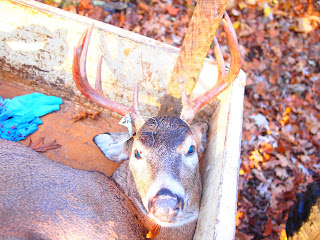