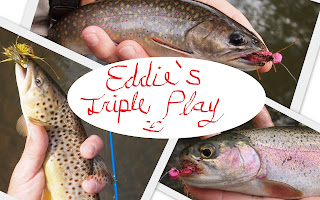 As I was driving home from Duluth on Monday morning I wondered how much rain had fallen on the central part of the state on Saturday and Sunday.  While no amount of rain would ever keep me from going fishing the amount of rain that has fallen definitely helps me decide where I will fish.

Nobody has their finger on the pulse of Driftless Trout like Nick Brevitz and it wasn't long before I had him on the line.  I was actually quite surprised that I didn't catch him in the act of fishing but a broken car and a bevy of unreliable friends had him stranded at home for the day.

"Please come pick me up and take me with you!",  Nick whined sounding more like a seven year girl than a strapping 20 year old dude.

Actually I think I may have been the one to suggest that we team up.  I was able to put up with him for a week in late June of this year when we traveled north to the Nipigon so I figured putting up with him for one more day wouldn't be all that bad.

I arrived at Nick's house at 1:04pm just as he had finished running a few errands for his parents and we were on our way.  Sometime in August I had misplaced my Wisconsin fishing license so we made a visit to Wal-Mart in Hudson to pick up a duplicate.

We arrived at our destination sometime between 2:00 and 3:00 where we immediately put some distance between ourselves and the bridge.

Nick started catching trout immediately on his number 9 Panther Martin brand spinner.  Over the course of the summer I've probably seen him land 100 trout on that savage apparatus. 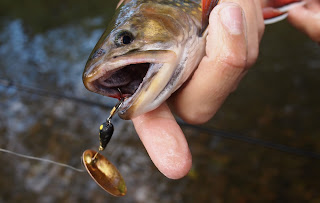 Even a piece of heavy equipment dangling from the Brook Trout's jaws does little to diminish the beauty of these amazing creatures. 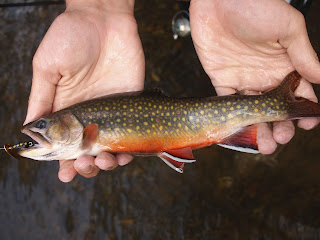 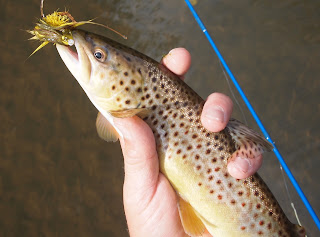 We came to the next pool where Nick noticed a few trout rising and suggest that I try fishing a dry fly.  I didn't have any dry flies with me but I did remember my box of terrestrials.  I tied a size 8 Pink Chernobyl onto my 12 pound fluorocarbon tippet.  Second drift bam!  Rainbow Trout. 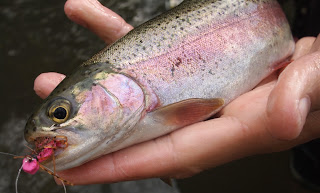 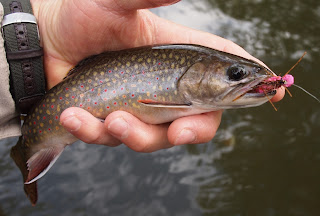 In recorded history there has only been 16 instances of an angler catching a Brown Trout, Brook Trout and Rainbow Trout in a single body of water on a single day.  Well I guess this is number 17 and only the 4th time that it has been done with fly fishing gear.  In one fell swoop I have pretty much cemented for myself a future position in the International Fly Fishing Hall of Fame.  I do my best to stay humble though. 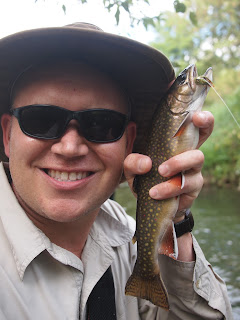 Nick was happy too despite his choice of head wear.  I wonder if anyone has told him that the Detroit Tigers are currently the last place team in the storied American League Central Division. 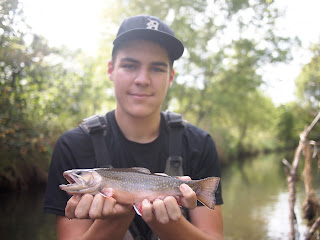 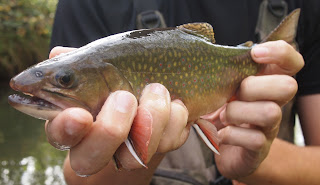 Continuing upstream I notice some cool mushrooms growing out of a branch that was hanging over the stream. 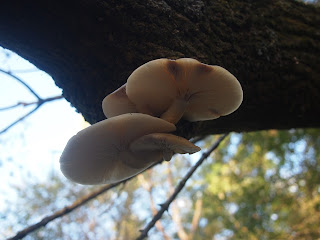 I collect spores, molds and fungus. 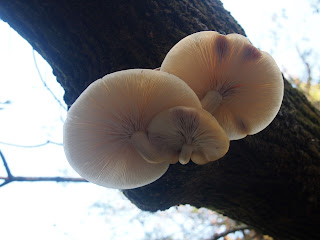 We fished until dark. 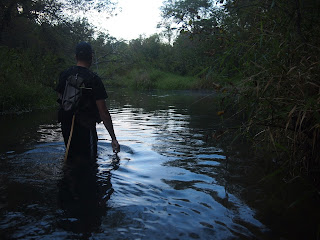