New Year's Day in Southeastern Minnesota marks the beginning of the stream trout catch and release season.  I had to get out even though I knew I had to be done fishing by 11:20AM if I was going to make it to my rescheduled family Christmas in time for dinner at 1:00PM.  Fishing can be tough on winter mornings but whenever I attempt to accomplish something challenging I always tell myself, "Stranger things have happened".

I was already on my stretch of choice when I saw the sun peaking over the horizon.  It was cold out and I was just being reminded about the leak in the right leg of the waders I had on.  I figured it would be a good time to check the temperature of the water. 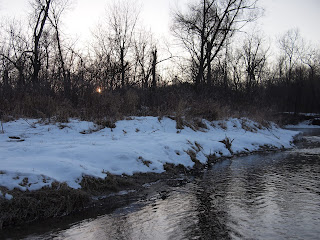 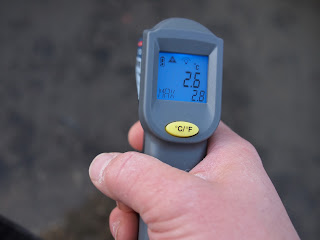 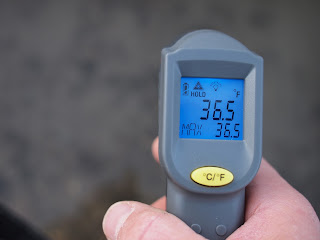 I see you admiring my CEN-TECH Infrared Thermometer.  I picked it up at Harbor Freight for five bucks after spending fifty bucks on other stuff.  It was one of those deals where if you spent fifty bucks on other stuff you could get the thermometer for five bucks.  Unlucky for you the deal is no longer going and it is now 26.99 plus tax.  It's nice not having to bend over to take the temperature of the water. 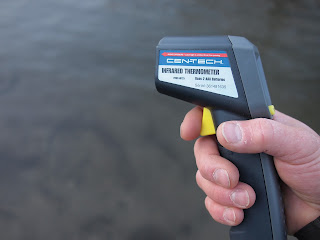 I read in an article put out by the Minnesota DNR that, "Fish are most active in water temperatures of 38 degrees and above.".  By my calculations I was 1.5 degrees on the side of being S.O.L. 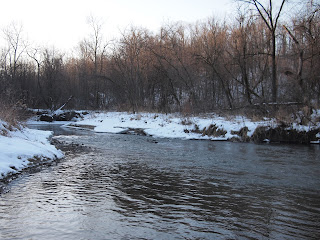 I was so happy not.  I forced this smile but figured I should take a selfy before putting my camera back in the dry bag. 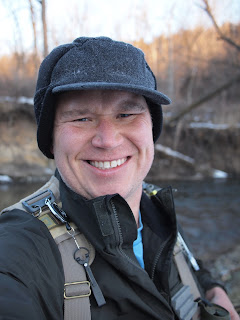 I thought it was cool how the rocks seems to be a different color after the little waterfall.  The current was just fast enough after the waterfall to inhibit algae accumulation on the rocks. 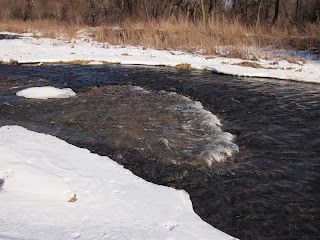 This was the spot where I saw my first two trout of the day.  By now it was getting to be close to 11:00am.  They swam around for a few seconds before hiding from my view.  About fifteen minutes later I actually had a trout follow my streamer for a bit.  It was a small thrill to see that. 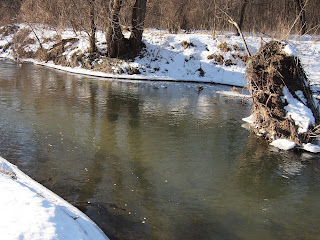 It was good to get out for a while on the opener.  I will be fishing again on Friday of this week and am confident that I will catch fish then.  Thank you for reading my latest masterpiece in it's entirety.  You are a true fan.
Posted by Eddie Rivard at 3:15 PM

"Thank you for reading my latest masterpiece in it's entirety. You are a true fan."

Stranger things have happened! ;) At least someone got out!

It seems as though at least one person kept reading all the way to the end. Thanks Howard!

It's always entertaining and enjoyable to read your posts Eddie. The photos that you provide are awesome as well.

Thanks Samson! Give Delilah my regards. :)